Historic Building: A Look Through the Years

The Water Wheel Centre building has been a significant landmark in downtown Northville for almost a century. What is today a contemporary work space, this historic building originally played a role in the Detroit area's rich automotive history.

In the early 1900s, Henry Ford, Sr., established the Village Industry Project, which brought manufacturing jobs to rural areas and provided farm workers with a stable source of income during the winter months. As part of this program, Ford purchased the Northville Mill property at East Main Street and Griswold in the tiny village of Northville, Michigan, approximately 30 miles west of Ford's Dearborn headquarters.

Kahn was often referred to as the 'architect of Detroit.' Detroit's Fisher Building, the Edsel and Eleanor Ford House in Grosse Pointe, and the Belle Isle Aquarium and Conservatory are just a few examples from Kahn's massive body of work.

The Ford Valve plant was used in the manufacture of tractor valves and components for Ford's Model T. The building featured a 19-foot-high by 7-foot-wide water wheel that provided electricity to power the machines. Two additions in later years increased the size of the building to 72,000 square feet.

The scenic area surrounding the plant became known as Ford Field. The informal gardens, home to numerous waterfowl, were enjoyed by Ford employees and became a popular tourist destination.

The plant remained in operation until the late 1970s. 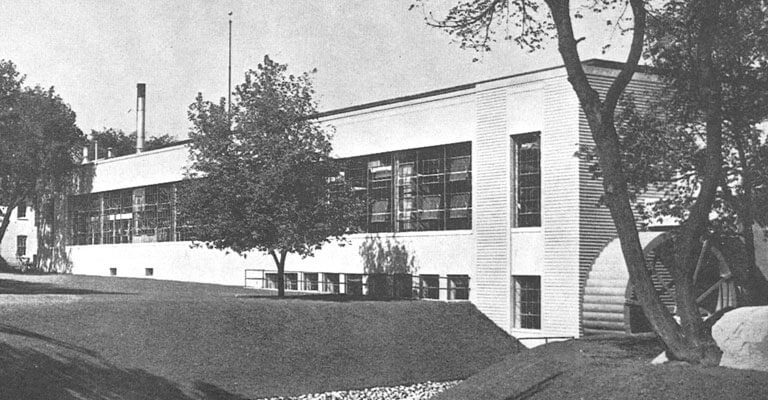 Richard Cox, a former engineer at Ford and local business owner, along with his wife, Diane Cox, purchased the vacant building in 1994 with the intent of operating their heat exchanger manufacturing business, R&D Enterprises, at the site. They donated the 9-acres of land surrounding the building to the City of Northville to be used for parks and recreation.

They began a series of renovations to the space, with a vision to stay true to the original Kahn design and to retain the building's original exterior.

In 1995, the Coxes received recognition for the Ford Valve Plant when it was listed on the State and National Registers of Historic Places.

That same year, Rick Cox developed a method to install energy-efficient double-pane argon-filled low-e glass windows in the original frames. Ultimately, over 9,000 windows were replaced into the original steel frames, which had been stripped and repainted.

A set of 15-foot-tall oak doors opening to the loading dock on the north side of the building were restored to their original beauty and functionality – they still open with the same motor originally used by Ford.

In 1998, the decision was made to rebuild the disintegrating water wheel. Plymouth-based Castle Enterprises reassembled and rebolted the wheel using the same specifications as the original. The fabricating firm was able to follow the rediscovered plans from a similar water wheel at one of Henry Ford's other early factories. Two sets of bearings were produced to allow a spare set for future replacements. The final phase included installing custom buckets commissioned by the Coxes. The restoration was featured in an article in the June 30, 2005 edition of the Northville Record.

Though it no longer supplies power, the iconic wheel still churns the waters of the Middle Rouge River 24/7 from March to November, ensuring future generations a connection to Ford's local history.

In 2005, R&D Enterprises outgrew the facility and the Coxes moved their manufacturing operation to neighboring Plymouth. They retained ownership of the building and began a second phase of renovation, converting the interior to upscale commercial/studio/office lease space. The multi-tenant building features an open ceiling creative atmosphere.

Renamed the Water Wheel Centre, the innovative renovation was nominated for a CREW Detroit Impact Award for "best redeveloped project in the Detroit Area" in 2009. Our application (PDF) for the award includes additional details and photos of the building renovation.

A 2008 Crains Detroit Business article featured an interview with Rick Cox and detailed the trend for "edgy" loft-style offices. The article describes the renovated space:

"The bare brick walls are contrasted with metal bookshelves in one office. Track lighting and drop ceilings hang from the heavy steel beams once used to support cranes. Thick exhaust pipes have given way to shiny data lines inside the building that hardly resembles a manufacturing plant now."

The Water Wheel Centre today is a vibrant commercial complex with 11 tenants, including a popular fitness club, and several engineering, technology and architecture firms, including two Ford Motor Company vendors. One could say this historic treasure has come full circle. Cox imagines that Henry Ford, Sr. – the innovator that changed history – would be honored by this innovative continuation of his legacy.